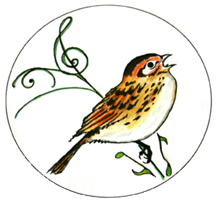 Chubby Sparrow Music (my music publishing company) has finally had its long-overdue site-wide update, just in time for spring!

The Music for Healing and Transition Program www.mhtp.org will be offering courses in Ann Arbor, Michigan in 2012.  This 5 weekend program teaches musicians to provide live therapeutic music at the bedside of the sick and dying.   Please visit website for more information, or feel free to contact Joanne Does, Certified Music Practitioner, London, ON at jdoes764@gmail.com or www.healingsounds.ca

This is the first of a new series of Harp-Related Q&A , to celebrate the Harp Blog being back in action (hooray!), and in honour of the first Peterborough-Kawarthas harp circle in over a year (!).

A sample of a tune arranged for multiple harps can be found by following the link at the bottom of the post.

A Harp Circle is an informal gathering of harpists (or harpers, if you prefer), which can take many forms.  The one thing they all have in common is the sharing of music.  A typical harp circle might start with a general meet-and-greet (which often involves people trying out each other’s harps), and everyone making sure their harps are tuned.  Bringing an electronic tuner is wise for this part, since there will be a lot of background noise (this is where tuning pickups really earn their keep!), and everyone will want to be at the same pitch (A=440, or concert pitch, is standard in most areas).

This is often followed by learning one or more group pieces.  Usually the group leader or organizer will have copies available for everyone, with parts at varying levels of difficulty (easy parts for beginners, more challenging parts for the more experienced).

Sometimes this group participation might take the form of a more formalized workshop, with a specific topic, such as singing with the harp, Welsh tunes, improvising, Irish ornaments, and so on.  However, in some cases it can be as casual as someone handing around some sheet music and saying, let’s all try this one!  Either way, the group organizer will let you know what format the circle will take.

At the mid-point will be a welcome break for munchies and socializing (participants are often encouraged to bring contributions of snacks, although sometimes these are provided by the host).

After the break, there may be more group playing, or the second half of the workshop, but often this is the stage for the “once-around-the-circle”, where people are free to play a piece of their choosing.  This can be a great opportunity for shy and inexperienced players to try something out in public for the first time, in front of a small and sympathetic audience.  It can also be a chance for more experienced players to try out something new, or play their latest “party piece” – essentially, show off their playing prowess.  It certainly never hurts to get a healthy boost to the old self esteem, in the comforting company of peers!  However, all players will be encouraged to pick something relatively short, so everyone who wants to has a chance to play.

The performance part, in almost all cases, is strictly voluntary.  The idea of harp circles is to have fun, in a relaxed, no-pressure environment.  Players can feel free to participate as much or as little as they like.  For the complete beginner, sometimes it’s great to just be able to meet other harpers and see different harps, even if you’re a bit too shy to try playing along the first time.

In honour of our first harp circle of 2011, I’ve whipped up an arrangement of Southwind for multiple harps.  You can follow the link here to download both a print copy and midi file version from Chubby Sparrow.  Feel free to add your comments or questions below.

St. Pat’s Fancy at Sadleir House in Peterborough, ON.

The third annual concert celebrating Irish music, with some of the proceeds going towards the Market Hall to help fund its new renovations. Sadleir House is an historic house in Peterborough, near the corner of Parkhill and George Streets. Market Hall is a much loved folk music and general arts venue in the middle of downtown Peterborough. There will be lots of great music from the likes of Cairdeas, Fiachra O’Regan, and The Jenish Sisters, as well as guest spots from the usual crew of local musicians. Tanah Haney will be playing Celtic Harp on a couple of harp-and-fiddle sets with John Hoffman (hence the harp component!).

For more info, you can visit the official Facebook page for the event or email Tanah at soloharp @ celticharper.com (minus the spaces).

Very cool version of Brian Boru’s, from the master of Celtic fusion himself.  I had only ever heard (and played) the traditional march version of this tune before, but it works surprisingly well as a song.  Complete lyrics are included below (they’re pretty much identical on all the online lyrics sites, including the notes in French and English, presumably taken from the liner notes of the CD).

The Harp Blog posted Brian Boru’s as a tune of the month way back when, which you can download here.  Following the link to Chubby Sparrow Music will take you to a midi version of the tune (along with a bunch of other free trad Celtic midi files).

A summary of Alan Stivell’s career and influence on Celtic & harp music can be found here (and of course the standard Wiki entry, here).  Alain’s official website is www.alan-stivell.com (trilingual in Breton, French & English).

They said that we were shameless celebrating our love
With devastation all around us
We are like the weather, specially the sun
And we choose a soft place by the river.
CAITLIN MAUDE, from Amhran grà Vietnam. 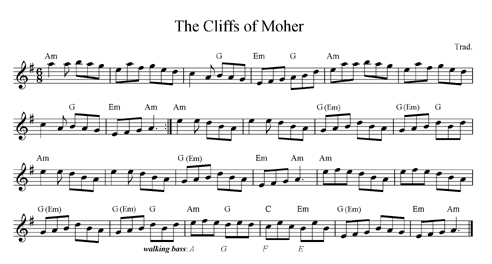 This upbeat tune is popular at the Celtic sessions in our area. It lies fairly easily under the fingers for harp (especially the B part), so with practice you should be able to play it at a decent clip. Click here to listen (right click to download the midi file).

We often play Cliffs of Moher in a set with Tenpenny Bit.

Estren & Porthlystry are 2 traditional tunes from Cornwall. They are featured in Sarah’s Cornish Tunes book from www.cornwallharpcentreshop.co. uk

Concert to be followed by a traditional Irish session. 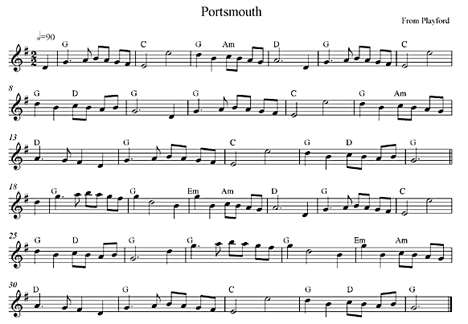 Portsmouth is a popular English Country Dance tune. This version is in G major. Goes well with Knole Park and All in a Garden Green. To hear a midi version of this tune, click here.

An upbeat 14th C. song by French composer Guillaume de Machaut, Douce Dame Jolie is quite easy to play on the harp. A simple rhythmic drone using open fifths is all you need for accompaniment. 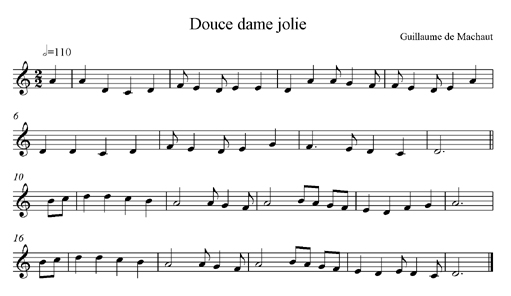 More info on this piece can be found here. To hear a midi version of this tune, click here.